A Tale of 20 Tarot Decks

Discovered that people are willing to donate $190 for me to write a LARP that involves 20 decks of Tarot cards (by funding the cards.)

Did not win the Vericon auction for said cards, but seem to have committed to writing the LARP anyway. Oops? — Carolyn VanEseltine (@mossdogmusic) March 22, 2015

The Vericon charity auction is a weird and wonderful thing.

Vericon is the yearly science fiction/fantasy/speculative fiction convention run by the Harvard-Radcliff Science Fiction Association. In practice, it’s half undergraduate celebration and half alumni reunion, sprinkled with a light covering of nonaffiliate attendees (like yours truly).

The twin purposes of the charity auction are 1) to raise money for charity and 2) to have fun. This triggers intense, bizarre bidding wars over things like an Acrobat Robot Pen (“the pen… that goes… like… THIS!”) or seven plastic coat hangers (“If the bidding goes up to $100, we’ll throw in… thirteen more coat hangers! Twenty coat hangers, folks!”) Many of the items are legitimately rare or valuable – I sadly passed on a first-edition copy of Vernor Vinge’s A Fire Upon the Deep, and I watched with envy as someone snagged a bag full of galleys for unpublished Tor books.

The brown paper grocery bag didn’t look particularly impressive when it first came up for auction. But then the auctioneer started pulling out Tarot cards, deck after deck after deck, and reading off their names – “Tarot of the Elves. Witches’ Tarot. Vampyre Tarot. Atlantis Tarot. Two different Cat Tarot decks!”

I own two decks of Tarot cards (the Gilded Tarot, and Stephanie Pui-Mun Law’s Shadowscapes Tarot.) I’m fascinated by the symbolism, but I haven’t used it extensively in my creative work. It’s a relatively untapped space, always waiting in the background. I thought, What could I do with 20 decks of Tarot cards?

The auctioneer called, “Fifty, do I hear fifty-five?”

In an undertone, my friend asked, “What are you going to do with twenty decks of Tarot cards?”

“I have fifty-five, do I hear sixty?”

“Sixty-five,” my opponent shot back.

“Twenty dollars on Carolyn’s bid,” one of my friends called from the back.

“Oh yeah?” a fourth party called. “Twenty-five more,” against me –

By the time it was over, there were five people in my bidding coalition (including a Mysterious Benefactor, who was getting all updates via text and bidding by proxy), and seven in my rival’s, several of whom had joined in for the chance to buy one deck at $10. My allies were far more enthusiastic than me – I topped out at $60, but one person got up to $125 before I started laughing helplessly and telling my coalition to stop, stop, I would write the LARP even if I didn’t win the bid.

The bag went for $290 – not to me. (My esteemable rival offered to sell me a deck or two at $10 apiece, but I told her not to worry, I’d just go to eBay.) And I started thinking, what kind of LARP can I write with 20 decks of Tarot cards?

There are four major components to a LARP:

For a theater-style game, the first is essentially optional. But here, every player gets their own Tarot deck – why else use twenty decks? (I can think of a couple other options – for example, place them around the room as environmental challenges, or give everyone an in-character reason to carry a deck of Tarot cards – but they’re less immediately enticing.) I want to use Tarot cards as the mechanical root of the game. 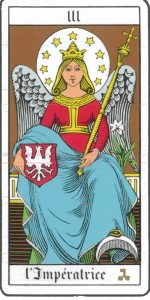 Beyond mechanics, I can tie each character thematically to one of the Major Arcana. (There are 22 Major Arcana, but I can easily strip a couple out – let’s say The World and The Tower, since they’re visually more place-like than person-like.) This immediately provides me with 20 different character archetypes, which will provide built-in prompts for writing different characters.

That gives me an immediate mechanical idea. What if the game mechanics revolve around spending cards? Perhaps you can spend another player’s Major Arcana to automatically win a challenge over that player. That feels good; I’m going to run with it.

How are normal challenges resolved? Hypothetically, it would be great to do a fast Tarot read mechanic followed by cinematic resolution (where both participants know how the challenge will resolve, but act it out in very impressive fashion for the benefit of those who don’t). However, I can’t expect everyone to be familiar with the Tarot (let alone know it by heart!), and asking people to grab a GM every time they want to know who wins a challenge is a Bad Plan.

Instead, I can use the numbers of the Minor Arcana to set up a system that everyone can instantly access. Players can resolve one-to-one challenges by spending 3 cards from the Minor Arcana – reflecting the standard past/present/future spread – and comparing what they spent. To add a strategic element, the cards must be revealed one by one, and there are three ways for the challenge to potentially resolve…

Since there are 56 Minor Arcana, that allows for > 18 challenges per player inside 4 hours. I’m not concerned about anyone running out of cards (unless they’re particularly profligate, in which case, they just lose.)

Although the system above is intended for unsupervised player-versus-player challenges, it can easily be adapted to provide environmental challenges. I could even just leave a deck of cards on an environmental obstacle along with instructions about how to challenge the object sans GM. That’s kind of fun.

What kinds of challenges are available in this game? I’m thinking some kind of theatrical combat, for one, just because that looks so fantastic when it’s cinematically resolved. Some kind of magical or psychic powers would also be great, but that depends on the setting. I should get on that point.

What is the setting for this game? For thematic reasons, I want something that feels nicely mythic, but I want to avoid actually stepping on anyone’s religion or spirituality (which is particularly tricky here, given that many people take Tarot far more seriously than I do.) There are many options – I could ground it in folklore and fairy tale (like The Dance and the Dawn), or literally incarnate the various Arcana, or take some kind of science fiction/science fantasy twist. But I think it might be a better idea to find an existing fictional grounding. (Borrowing a preexisting setting is not unusual for this kind of LARP – the last Intercon included games based on Star Wars, Batman, P.G. Wodehouse, the sea shanties of Gordon Bok, and Edgar Lee Masters’s Spoon River Anthology, among others.) 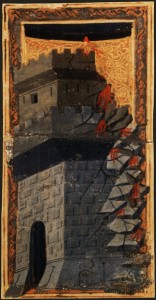 When I was perhaps thirteen, I encountered the short story “More Light”, by James Blish (summarized here). It contains most of a complete text for The King in Yellow, but when I first read it, I was completely unfamiliar with the Lovecraft mythos. I loved the image of Carcosa, though – a mystery city that appeared overnight, on the shores of the lake but behind the moon, where all knew its name as soon as they looked upon it. Also, Blish’s Act Two is a masquerade, which is a good excuse for putting everyone in the same room….

…except that I’m not interested in borrowing Blish’s plot. Apart from the built-in spoilers problem, Blish’s story involves an incestuous love triangle and references Lovecraft’s racism. I am not prepared to tackle these (or ask players to tackle them) in a LARP. I just want to evoke my first impressions of the story – the myth, the wonder, the creeping hints of horror.

Time to fiddle with the plot. What if our players actually went to investigate the mystery city, rather than staying home and staring across the lake? To hold all the players in the same space (it’s important in LARPs) the city itself could be abandoned, but there could be a palace within the city, visibly occupied, with instructions (a plaque, or etchings in the street, or a voice from midair) that those who wish to enter must come at a certain day and time, and that those who enter will be rewarded, but no others will ever be allowed within. (In written fiction, this would be a ridiculously clunky device – but written fiction rarely locks twenty people in a single location for four hours.)

This gives me access to factions and the beginnings of a plot. Instead of bringing all the players across from the other side of the lake, I can start some characters in Carcosa. Also, if I use the warring cities theme from “More Light” (where Hastur and Aldebaran are presented as cities at war) and bring delegates from both to Carcosa, then I can have representatives of two historically hostile factions trying to deal with Carcosa and maneuver for advantage.

Looping back to the Tarot, I can readily assign and separate factions by card. Death is a transformation card, and the appearance of Carcosa will transform Hastur and Aldebaran, so the Death character belongs in Carcosa. The Empress should be Cassilda from Hastur, and the Hierophant is Noatalba. The Lovers – perhaps I could assign two players to this card, where one is from Hastur and one is from Aldebaran? That could be a marvelous subplot – but all the players would see it coming out of game, if everyone can see everyone else’s Arcana. And if Arcana isn’t generally known, it damages the ability to automatically win a challenge. Hmm.

But this can be resolved with a mechanical tweak. What if players reveal their Arcana whenever challenged (giving the other player the chance to automatically win), but otherwise keep their Arcana secret? That could have some major benefits narratively – for example, it will be in the Devil’s interests to avoid conflict, because knowledge of that character’s Arcana would immediately encourage player distrust. This feels like a good idea, too.

I’m going to stop writing now, because I’m definitely venturing into spoiler territory, and I’d prefer not to have too many spoilers in the wild if I should develop this game in full. But one closing observation…

When I started writing this post, I was certain of two things – every player gets a Tarot deck and every character gets a Major Arcana. Here at the end, I’m well on the way to a solid game plan, and the notes above illustrate my creative process. There’s a basic pattern here:

…and continue steps 2 through 4 in a rinse-repeat cycle until the end, occasionally revisiting 1 for a new infusion of inspiration. It certainly isn’t how everyone works, but it does work well for me.

Thanks again to the coalition of backers who wanted me to have 20 Tarot decks. Even though we didn’t win, you made magic happen.