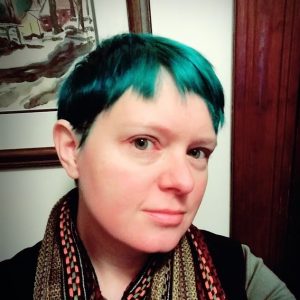 Hi! My name is Carolyn VanEseltine.

Since my industry start in 2002, I’ve held positions at Harmonix, Simutronics, and Giant Spacekat, among other studios. I’m a multifaceted developer currently focusing on programming (C#/.NET/Unity), but I’ve also done narrative design, gameplay scripting, production, community development, playtest coordination, QA, web support, and digital submissions. I write award-winning interactive fiction (showcased at this site!) and I participate enthusiastically in game jams such as the Global Game Jam and Ludum Dare.

I share my passion for game development. I’ve discussed game dev and game design at Arisia, BFIG, GaymerX, and Boston Women in Games, and I’ve been a guest on Fresh Out Of Tokens, Polygamer, and Design of Play, among other podcasts. I gave the talk  “Everyone Can Make Games Now” at Google.

I wear my heart unashamedly on my sleeve. It does not break easily.