I read a lot of brilliant, beautiful things. Most of them don’t get posts here. Flex is the exception, and it earned that exception because it was written for people who love video games. (If you’d like to cut to the chase, read this excerpt at SFSignal.)

Don’t get me wrong; it’s not about video games. Here’s the blurb, borrowed from Amazon: 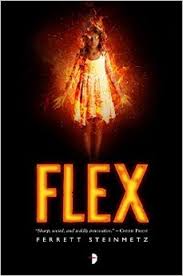 FLEX: Distilled magic in crystal form. The most dangerous drug in the world. Snort it, and you can create incredible coincidences to live the life of your dreams.

FLUX: The backlash from snorting Flex. The universe hates magic and tries to rebalance the odds; maybe you survive the horrendous accidents the Flex inflicts, maybe you don’t.

PAUL TSABO: The obsessed bureaucromancer who’s turned paperwork into a magical Beast that can rewrite rental agreements, conjure rented cars from nowhere, track down anyone who’s ever filled out a form.

But when all of his formulaic magic can’t save his burned daughter, Paul must enter the dangerous world of Flex dealers to heal her. Except he’s never done this before – and the punishment for brewing Flex is army conscription and a total brain-wipe.

However… the key premise of this world is that a sufficiently unhappy person with obsessive tendencies can wear a hole in reality. Each ‘mancer’s magic is different, because each ‘mancer’s magic matches their personal obsession. And one of the most important characters in this book is a videogamemancer.

Were you ever obsessed with a video game? I was. In 1996, I was addicted to GemStone III, and I wanted to be my character more than I wanted to be myself. Being an honest, fearless sorceress surrounded by friends and powerful allies sounded way better than being a depressed, isolated 16-year-old.

Over the next ten years, my obsessive love for the game transformed into something healthier. I realized in college that I could be honest and fearless in my own right, and I parlayed my passion for GemStone into a position on the GemStone dev team, which led eventually to my current career.

But it’s still easy for me to see myself in the world of Flex. And if you yourself were almost a videogamemancer, then you’ll see yourself in this novel.

And if not – if you just enjoyed video games, without developing a crazy, obsessive love for them – then this book was written for you, too. If you know how to enter the Konami code, what happens when you grab a fire flower, or why sneaking around under cardboard boxes is funny, then you’ll appreciate Flex on a wholly different level than someone who doesn’t.

And if you don’t even like video games, then it’s still a spectacular read. After all, Paul Tsabo is not a videogamemancer, and we’re seeing the world through his eyes. He’s an ex-cop, an amputee, a divorced husband, a devoted father, a man who made paperwork into magic – and, most of all, someone driven by the desire to wring justice from an unjust world… a longing we can all understand these days.

On top of everything else, I have a selfish reason for asking you to read Flex. I was a beta reader for the sequel, Flux, and where Flex made me sniffle, Flux made me cry. It is one of the best novels I’ve ever read, and I want everyone else to be able to read it, too. If Flex doesn’t succeed, the publisher may reconsider Flux, and that would be a tragedy.

If Flex sounds appealing at all, please try the excerpt. If you like it, here’s the Amazon link.

(Disclaimer: I met Ferrett in person last August, and we’re friends now. But I was a fan of his writing first – I read his blog for years, and his short story “Run, Bakri Says” is one of my all-time favorites.)