What? My perspective is evolving! 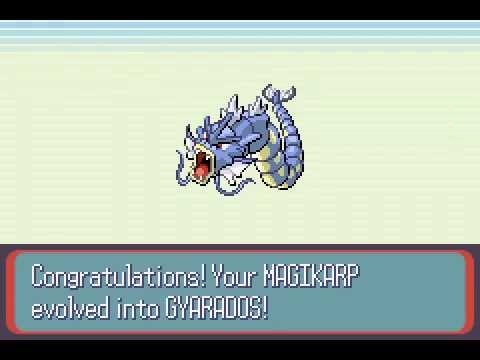 According to the Pokédex, Magikarp is about 0.9 meters long, but Gyarados is 6.5 meters long. So once it evolves, it can’t fit in a duck pond any more.

One kind of evolution

I used GameMaker over the weekend, and it was fun until it wasn’t, and I’m kind of mad about that.

For context, GameMaker was my first graphical engine. I’ve mostly used it at game jams – Ludum Dare, iamagamer.ca, and the Global Game Jam. It has a drag-and-drop interface for new users and rapid prototyping, but it also has a decent scripting engine underneath.

For additional context, I haven’t booted up GameMaker since late 2013, so long-time followers of this blog* will realize I’ve learned C# and Unity since then.

I was halfway through a game of Rogue’s Tale on Sunday when I got annoyed. Rogue’s Tale is an indie roguelike notable for rapid, unavoidable death – and I say that as a veteran Nethack player with multiple ascensions under her belt. I thought, I could do better than this.

…maybe yes, maybe no; everyone’s an egotist in the moment. But the pertinent part is that it was Sunday, therefore a weekend, therefore my time was technically my own. I booted up GameMaker, started a new project, and got to work on a graphical roguelike.

I started with the drag-and-drop interface – a player, a basic monster, a dungeon wall.

I moved out of the drag-and-drop interface into scripting. It was less repetitive; I could just toss the same script on each keystroke.

I moved from there into full-on scripting, because I needed prototypes. I knew I’d be making a bunch of creatures, and I wanted to be able to mix-and-match their behavior. So I did some complicated stuff with scripting that’s probably not super interesting to anyone else, but there’s a screenshot of the script list below. 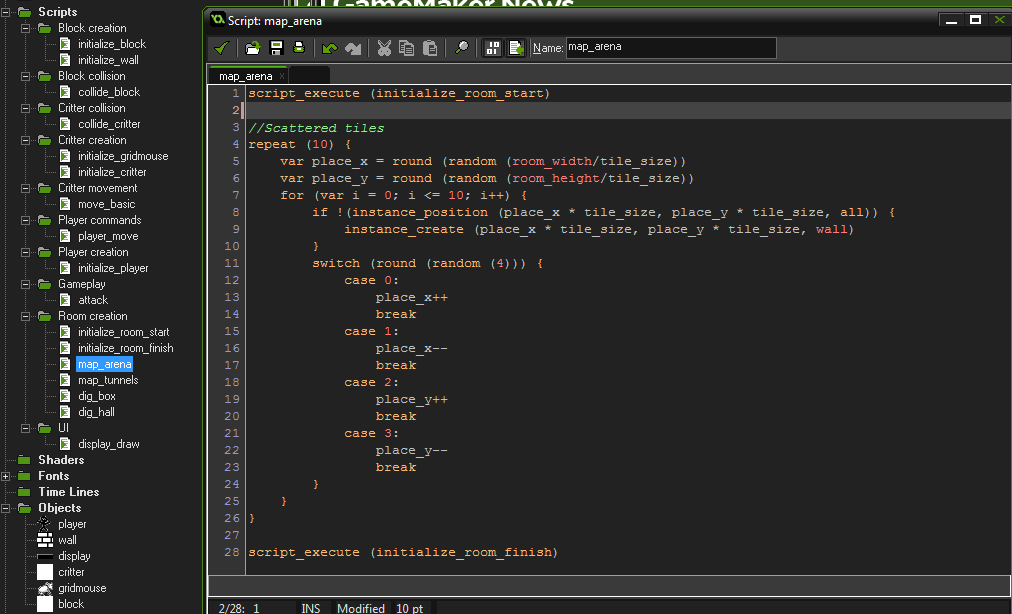 I shut GameMaker down because it was midnight (hey, these things happen) but also because I was annoyed.

In the past, GameMaker was a perfect tool for me. But I don’t even think the way I used to. I wanted greater versatility in my data structures. I wanted lists instead of arrays. I wanted get and set accessors. I wanted to lump a bunch of small functions in a single class rather than building a whole script for each one.

I wanted C# back.

I could still create a roguelike in the GameMaker drag-and-drop interface. I could even pull off procedural dungeon generation, if I were determined enough. And it would work, and it would be awesome, and I would be deservedly proud of my accomplishment.

But it’s hard for me to use it now. GameMaker hasn’t changed significantly – but my perspective has evolved, and everything looks different from here.

But this isn’t actually about programming

It’s about the experience of having that perspective shift.

GameMaker is a fantastic tool. I can’t say enough nice things about it. (And it’s professional quality – Spelunky, Nidhogg, and Hotline Miami were all created in GameMaker.)

But I’ve changed. And while I think the change is positive, the experience of that change isn’t positive.

I miss the way things used to be.

Another kind of evolution

Not too long ago, I read Andy Weir’s The Martian. It’s a brilliant hard SF novel that’s excellently summed up in this xkcd:

I loved this book so much that I read 20% of it out loud to my girlfriend before she took over and finished it herself. She’s a space nut and she loved it even more than I did.

I’m a hard SF fan from way back. I grew up on Isaac Asimov, Larry Niven, Arthur C Clarke, and Robert L Forward. This is a book for people like me.

…except that it’s not.

It’s pretty clear to me that I’m not Weir’s intended audience. It’s obvious because of the random low-level sexist humor and because of the ways women are depicted. (I’m not going into the details here, because it’s spoilery and off topic, but you can see my opinion in more depth here.)

Ten years ago, this wouldn’t have bothered me. It bothers me today.

To give you a bit of backstory – I’ve never lived in a house without a computer, because both my parents were computer programmers. I grew up fascinated by video games. I experimented with LOGO and BASIC and Turbo Pascal.

Why did I get a degree in creative writing instead of computer science?

Here’s what I do know: I never took a computer science class in college. A friend warned me that CompSci 101 was really hard, because the professor wanted to wash out people who weren’t serious. And I believed them, and so I took biology instead.

If I’d been a boy, would they have warned me at all? Or would there have been encouragement too – “CompSci 101 is hard, but you can make it through”?

What if the hard SF novels I loved were filled with women as well as men? As a teenager, I didn’t know about Ada Lovelace, Grace Hopper, or Hedy Lamarr. The female programmer I knew best from fiction was Isaac Asimov’s Susan Calvin – “a frosty girl, plain and colorless, who protected herself against a world she disliked by a mask-like expression and a hypertrophy of intellect” (I, Robot).

I look back, and I wonder what could have been different if I saw someone I wanted to be, instead.

I look back, and I see that the vast majority of hard SF was about men, by men (credit to Nancy Kress for being the exception). The novels I read about women, by women, were fantasy or science fantasy. And I wonder what if.

I don’t know, and I’ll never know. Second-guessing the past isn’t particularly useful.

But now that I’ve recognized the disparity, it’s impossible for me to miss it. And it’s not just gender (though that’s easiest to highlight from my own experience) – it’s depictions of minorities across the board, in all media. It’s the evidence that protagonist means white, straight, cisgender, able-bodied, monogamous, male. I don’t know how to close my eyes to that.

The books I read haven’t changed – but my perspective has evolved, and everything looks different from here. I would have enjoyed The Martian more if I hadn’t seen the sexism in it. If the “I really recommend this book” weren’t accompanied by an “except”.

My viewpoint has evolved. On some level, I resent it.

The horrible experience of change

Abstractly, we all want to level up. But once your perspective evolves, it’s impossible to go back to how you saw things before.**

After the kaleidescope turns, you’ll never get the sparkling glass back to the same position. And that’s not always going to be comfortable. On the contrary, sometimes it’s going to feel awful. (Breakups, for example.)

But that doesn’t mean it’s a mistake to grow. To change. To recognize that the things you used to love are not perfect, or not perfect for you.

To be aware of flaws, and adapt to them. Or move on to something new.

* By which I mean people who started reading in 2014. Sibyl Moon hasn’t been around that long.↩

Thank you to everyone supporting Sibyl Moon through Patreon!
If this post was interesting or entertaining, please consider becoming a patron.