Slides and source from Game Dev for Everyone: Modern Interactive Fiction

The LGBTQ gaming convention GaymerX was this weekend in San Francisco, and I had a wonderful time! This was my first convention on the west coast, and I finally got to meet Dan Fabulich (Choice of Games), plus Tanya DePass (#INeedDiverseGames), Mark Barlet (AbleGamers), Anita Sarkeesian (Feminist Frequency), and too many other Twitter friends and role models to mention, to say nothing of new friends. (Hi everyone!)

I also went to panels – a lot of panels! – and took notes. I’ll be putting those up over the course of the week.

I could not be happier with my decision to go, and I’m now 98% sure that I’ll follow it up by attending GaymerX East next month (NYC, November 12 & 13). More info on that later.

With that said, guess who had a spectacular technical failure? I was presenting Saturday on a topic dear to my heart – modern interactive fiction tools for beginning game devs – and giving a rapid overview of Twine, ChoiceScript, Ren’Py, and Inform 7. I wanted to show the differences between how the systems are used from both practical and stylistic standpoints, so I wrote the intro to a small game and then executed it in all four systems….

…and the projector didn’t work with my new laptop. Which caused a graphics driver crash. Fun times! And because so much of it depended on installed programs, scouting for an emergency laptop just wouldn’t have sufficed. The show must go on, so I winged it, but I promised to put all my materials online afterward. Here goes.

To view the source code:

To see the game run in its various forms:

To get the various engines:

This isn’t directly related to my talk, but if you want to play an extraordinarily gay (but rated E for everyone!)  parser game, I created “Rainbows and Dance Parties” to celebrate Obergefell v. Hodges. Expect exactly what you see on the cover. 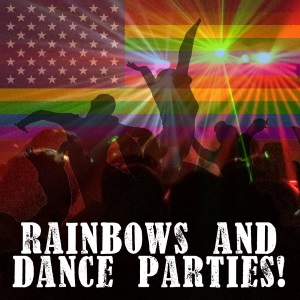