GameLoop: Writing For Cultures That Aren’t Yours

This past weekend, I attended Boston GameLoop, an annual game development unconference. I’ve been going for years, and I’m always impressed by the sheer wealth of knowledge available.

I take notes. Lots of notes. And I’m going to be writing up my notes from this year (in fleshed-out form) over the next few posts.

GameLoop participants: Apart from the discussion leaders, I have not attached anyone’s names to these writeups, and I’ve mostly scrubbed personal anecdotes out to maintain the privacy of attendees. Please contact me (carolyn at sibylmoon.com) if:

…and I’ll make a correction. Thanks!

Writing for cultures that aren’t yours 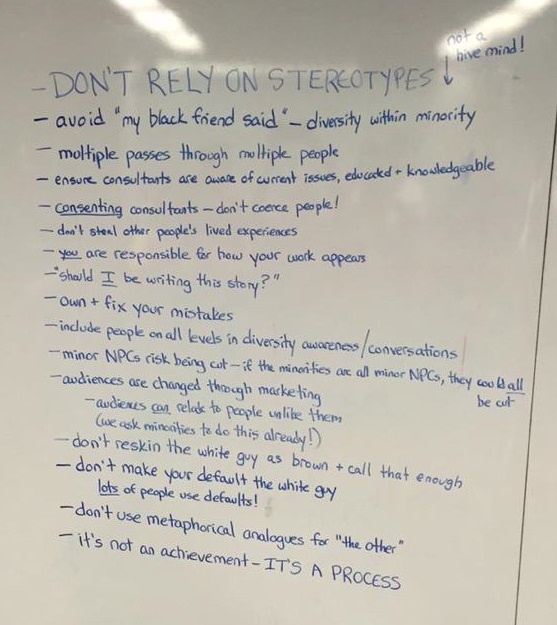 Our whiteboard notes. There’s a transcribed version at the end of this post.

Other cultures should not be represented in “white person” ways. Cherry-picking your favorite aspects of a culture and representing it as “this is what the culture is” is not okay. It’s important to show the entirety of a culture, not just the sexy parts.

But this doesn’t mean the authorial voice has to be subsumed, even if the author is not from the culture involved. It just means that people who have some connection to that culture need to be involved, to make sure it’s done right. (These are cultural consultants.)

Examples of getting this right:

A major problem with maintaining diversity of characters in AAA video game development: by the time anyone calls out lack of diversity in a game, a lot of work has already been done, and then there’s intense resistance to doing anything about it. Creative directors don’t want to redo work that they think is okay, because work is expensive and redoing work is more expensive.

Effectively, the structure of AAA and the publishing industry are anti-diversity. Also, story is not (generally) an industry priority – it’s what wraps around a game, rather than the essence of the game itself. This also interferes with diversity-as-important.

About money and diversity:

If an AAA studio were composed of people who cared about diversity, from bottom to top, then someone would call out lack of diversity at the very beginning, and there would be no course-correction involved.

Exacerbating this problem: When there are more minorities in a studio, then people in that studio are more likely to see a problem when there’s no minority representation. But AAA studios are primarily composed of nonminorities who hire nonminorities.

Hiring cultural consultants is a good way to get a culture right instead of accidentally including just the “sexy” parts of a culture. But it’s not enough to hire consultants if you don’t listen to what they have to say.

“Write what you know” doesn’t mean “Only write what you know”. It means “Increase your body of knowledge and then write from that increased knowledge”. Insist on knowing more! Approach the world (and people unlike you) with curiosity and open minds.

People are scared of screwing up, so they play it safe and cater to the majority instead of including diversity. Don’t play it safe. Do the best job you can, and take whatever criticism you receive as a way to do a better job the next time.

It’s easy to shut down when questioned or criticized, especially on cultural matters. Don’t do it! Listen to criticism and judge the criticism on its merits.

Meetups and conferences are a great place to meet people who are unlike you.

Some people are afraid of asking for criticism on cultural matters because “people are so angry”. But the anger comes after mistakes are made. If you ask before making the mistake, this reduces anger dramatically. People want to help!

Another important way to defuse anger: make it clear that you are offering to pay for cultural consultation. If you come to someone and say “I will pay you $150 if you will please help me see where I am screwing up in my representation of your culture” this will generally go over very well. People like money.

If you don’t have money right now, offer a percentage on game sales, or ask for credit until you can pay from game sales, or offer your services in barter. Any of these might work. But don’t expect help for free.

The hard question: People of color need jobs. Some of them are writers. Would it be more ethical/practical for people from various cultures to write about those cultures, rather than those cultures being written by people not from those cultures?

Including diversity is good. Cultural appropriation is bad. Messages about what it it means to be part of a culture should come from people who are part of that culture.

The message of cultural appropriation is: “I don’t understand you, and I don’t care to understand you.” That’s awful. Don’t do that.

At the end of this talk, we put together a list of advice for people and studios trying to write diverse characters. The whiteboard photo is at the top of this post, but I’ve written it out below, with a few clarifying notes in italics.

This site is supported through Patreon. Please consider becoming a patron!