A great article I couldn’t have written – Max Gladstone, on fight scenes

I wrote my first fight scene in 2012. I know this because I was bewildered by how difficult it was to write, and then abruptly realized that I’d never written one before. Despite increasing practice and experience, I am still fumbling about in the dark, and I am not the right person to give advice.

Max Gladstone is. To quote his latest on the subject:

Fight scenes are an art form all their own, with their own poetry, purpose, and tactics.  Fight scenes can captivate, exposit, terrify, entice, seduce, break, reveal, and communicate.  Anything art accomplishes, can be accomplished with a fight.

Intrigued? If so, Gladstone just wrote a post where he broke down seven different fight scenes (complete with YouTube clips) in “Jessica Jones Has Better Fights Than Daredevil”. His prior article on the subject is “Fighting Words: Thoughts On Prose Style Prompted By John Wick”, which mostly talks about how to leverage the ways in which prose excels at being what it is, but includes a detailed analysis of a John Wick fight scene on the way past (YouTube link broken, sadly).

The examples are all cinematic fight scenes, and the medium of IF doesn’t behave like the cinematic medium. If you’re looking for IF inspiration, you’ll have to take the medium into account. It won’t be a direct translation.

But if you don’t love fight scenes – then there’s always something to be learned from examining a medium through the eyes of someone who loves it, understands it, has passion for it, can show you all the tiny nuances that you never would have seen. And if you do, then you can smile when you already know what he’s talking about. 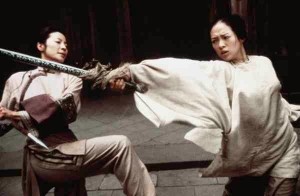 From Crouching Tiger, Hidden Dragon, one of the examples in Gladstone’s post.