What is a parser game?

Parser games are a well-known form of computerized fiction. To play a parser game, players type commands at a prompt, and the game attempts to parse those commands and carry out actions. 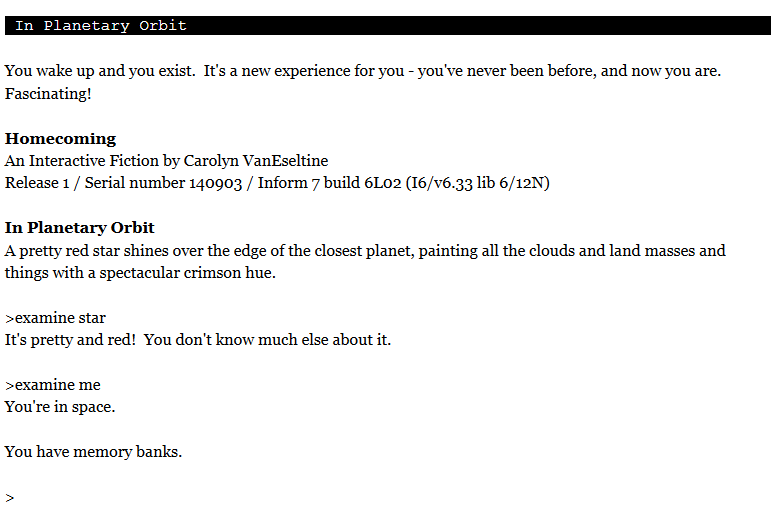 Popular parser games include Will Crowther’s Adventure, Infocom’s Zork and Hitchhiker’s Guide to the Galaxy, Andrew Plotkin’s Spider and Web, Admiral Jota’s Lost Pig, and Emily Short’s Counterfeit Monkey, among a great many others. In the modern era, many parser games can be played directly in a web browser, though others may require an interpreter.

There are 6 judging categories:

A winner, second place, and third place will be awarded in each of the categories above. There will be no prizes – just the pride of accomplishment.

How do I enter my game?

To enter ParserComp, go here to upload the first draft of your game.
The first draft is due by midnight Eastern on February 1, 2015. Remember to include a walkthrough!

Games must be parser games
For the purpose of this competition, a parser game is one that accepts typed input, processes that input with a parser, and interprets the parsed commands within a world model. A list of tools for making parser games can be found here.

Use of the theme is optional
If you don’t want to use it, you don’t have to. Games that do not use the theme will not qualify for the “use of theme” category. They will not be penalized in any other way.

Games must be written in the designated window
If you started work on a game before Nov. 1, that game does not qualify for ParserComp.

Games can be previously released, as long as they were written in the window
If you write a game for a different event, or release your game in advance, that’s just fine. You could participate in the New Year’s SpeedIF, for example, and then put your game in ParserComp. (However, no writing can be done before November 1, so IntroComp games would be disqualified.)

Three games per author maximum
One game per author is recommended, but if you get really inspired, that’s okay. Just don’t get too carried away.

A final draft must be submitted by February 14, 2015
The purpose of the polish window is to allow time for betatesting, bug fixing, etc. However, your first submitted draft can be your final draft if you don’t have any changes.

Authors may only discuss their own games during the voting window
Talking about your own game is okay, but don’t talk about other people’s games.

Discussing the competition is okay, but canvassing for votes is not
Stay classy.

Open judging
Anyone who isn’t participating can judge the games. A judging link will be provided when the games are released in February.

Judges must play at least half the games
This helps ensure a level playing field.

Games will receive scores in 6 categories
Judges will score each game 1-5 or N/A in the following categories:

These scores will be used to determine awards, but they will not be publicized or provided to the authors.

Judges will provide feedback to authors
In order for a judge’s ratings to be accepted, the judge must provide a few sentences of feedback on the game as well as the numeric ratings. This feedback will be delivered anonymously to the game’s author at the end of the competition.

Want to participate? Not sure how to start?

Each of these authoring tools has been the basis for one or more games submitted to the Annual Interactive Fiction Competition within the last five years.

If you need to find beta testers, want to talk about your ideas, or hit any snags while authoring, you can get help from an active support and discussion community at www.intfiction.org.