On Tuesday, my friend Ashleigh and I went on a one-day vacation field trip to The Pinball Wizard Arcade in Pelham, NH. After buying a paper cup of tokens at the front desk, we meandered around playing whatever caught our eye, which included (among others) Arkanoid, Gauntlet Legends, Sailor Moon (it’s a beat-em-up), Q-Bert Qubes (a surprisingly cunning puzzle/action game), and the four-person Pac-Man Battle Royale. And, of course, a ridiculous amount of pinball. 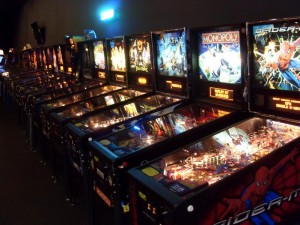 I’ve always enjoyed pinball, but I’ve never been a connoisseur. When I play pinball, it’s usually “hey look, a pinball game!” followed by dumping in quarters. I knew that tables were different from one another, but I never appreciated just how different until I played a dozen machines back to back. Even seemingly minor changes in the table configuration can produce a vastly different experience.

In non-digital games, there’s an entire category called dexterity games. This includes traditional classics like marbles, jacks, and pick up sticks, as well as more commercial-era games like Operation, Jenga, and Sorry! Sliders. A dexterity mechanic even appears on two Magic: the Gathering cards, though these cards are almost never played and now appear on the reserved list (aka the We Will Never Print These Again list.)

The modern pinball game straddles the line between dexterity and digital. The player’s interaction is physical, the scoring and feedback are digital, and the physics engine is the most accurate one possible.

And from a game design perspective, pinball is completely fascinating.

Historically, pinball design was affected by the particular economics of pinball, since pinball machines cost thousands of dollars. Many immediate consumers purchased pinball games as a commercial investment, so pinball had to be fun for the end player (or no one would play, resulting in no income) without giving them a disproportionate amount of time for their quarter (or no one would have to put in more quarters, resulting in no income).

Today, pinball is a much smaller industry, and the economic context has changed accordingly. Stern holds a near-monopoly in the industry, and the most significant challenger on the scene (Jersey Jack Pinball, a really interesting contender) has only shipped two games so far. According to Stern, 50% of their games are going overseas, and 70% of the games that stay in the United States are purchased by collectors and hobbyists.

But the core expectations haven’t changed. Pinball games should rely on gravity and fight gravity through flipper action (and, occasionally, whacking the machine). They should have multiple balls (lives) per play. They should track your score as you play. They should present players with a variety of increasingly complicated challenges. And they should make fantastic noises and flash exciting lights, because seriously, what else do we play pinball for?

(Okay, that last isn’t universally true, but it’s true of every pinball machine I’ve ever played. I’m not very old-school in my pinball.)

The rules of a pinball game are enforced by a combination of physics (gravity, flipper and plunger action) and electronics (scoring, bumpers, drop targets, and so on.) None of these happen by accident. Designers, mechanical engineers, and software engineers work together to determine the rules and implement them in physical and electronic form. (There’s a Wired article that takes a behind-the-scenes look.)

The game mechanics of pinball

In a pinball game, the player’s choices expand as the player’s skill set increases. A novice pinball player just wants to keep the ball in play as long as possible. More advanced players begin aiming for specific targets when they receive cues from the game, and expert players understand the various series of tasks within a given pinball game, and then maneuver among them to maximize points.

Ideally, a pinball game will engage and challenge all these players – the novice mashing the flippers, the intermediate player aiming for specific targets, and the masterful player deliberately selecting among the various tasks available. (For detailed pinball strategy, check out this list of key skills on the Internet Pinball Database.)

The skill factor is severely underestimated by novices, which is why New York City (along with much of the rest of America) outlawed pinball for thirty years as a form of gambling. (In fairness to New York, flippers weren’t invented until 1947, and pinball had been outlawed in most cities around 1942.) But the skill component is in fact enormous. Mark Steinman (of PAPA, the Professional & Amateur Pinball Association) asserted to Kill Screen, “Every time you drain in this game, it’s your fault.”

The best roguelike games (particularly those conforming to the Berlin Interpretation) bear a distinct resemblance to pinball. Novice players are just trying to stay alive from turn to turn. More advanced players have a better understanding of the options available. In addition to moment-by-moment tactical reactions, they have techniques that will help them stay alive, such as knowing that identify, light, and destroy armor are three kinds of scrolls in Nethack, or knowing how to activate multiball in a pinball game. Expert players have a broad strategic understanding of the game, so they understand the best circumstances to use each of the techniques that they’ve learned.

And pinball games, like roguelikes, generally feature permadeath: at the end of the game, you’re starting from scratch all over again.

Game balance is the concept and practice of tuning a game’s rules. What this actually means varies from genre to genre, but the basic idea is to ensure that a player’s choices are always meaningful. (For more on game balance, here’s Ian Schreiber’s excellent writeup.)

Balancing a roguelike is a matter of numbers – combat numbers, experience levels, spawn rates, item rarities. It involves significant spatial considerations, such as the shapes of dungeon rooms and the frequency of special areas and levels.

Balancing pinball also involves numbers and spatial considerations, but in a very different way because of the medium’s sheer physicality. Which locations are easy to reach? Which locations are hard to reach? What angles will the ball encounter, and how will those angles interact with the layout of the game? A bad decision can shut off entire sections of the table and render any related choices meaningless. At the end of the day, a badly balanced roguelike will be evident in the numbers, but a badly balanced pinball table will be evident in the physics.

Bad game balance also shows up in the fun – that most critical and yet most elusive property of good games. If a game feels pointless, or frustratingly hard, or players don’t understand the reasoning behind a choice (or don’t recognize that a choice is available!) then something’s wrong with the game design, and the game balance is likely off.

In a pinball game, game balance is the difference between a table that feels good and one that doesn’t. There may be useful things that can be done with spreadsheets, and angle calculations, and all the evidence and data from every prior pinball table – the same things we have for roguelikes, fighting games, first-person shooters, and every other genre of game. But at the end of the day, the interface between the player and the table is too complicated for an algorithm.

The physical and digital realms

As physical tables lose ground, digital pinball is becoming increasingly popular. Digital tables can play with the pinball genre in a way far beyond physical tables, including things such as altered gravity, localized balls, or monsters wandering around the field. The powerful physics engine of Unity 3D makes it natural for creating pinball games, and several premade examples are available in the Unity assets store. Plus, digital pinball can be played for hours on end without scrounging for quarters.

But there’s something magical about physical pinball – the vibration of the plunger, the thwack of flippers against the ball, the deeply solid way that everything moves and connects.

I design games in a digital space, but games have existed in physical space for thousands of years more than in the digital space. Pinball, playing cards, Pictionary, dice, paintball, chess, football, Senet – these are the precursors to my work. It’s valuable to spend time in that space and recognize what makes it special, to see how it relates to and differs from the digital worlds I build.

This field trip was completely worth it.

Thank you to everyone supporting Sibyl Moon through Patreon!
If this post was interesting or enjoyable, please consider becoming a patron.