My primary example will be the puppy from Beet the Devil. This should be reasonably spoiler-free, so don’t worry if you haven’t played yet.

For people who haven’t played, here’s a transcript that shows off some of the puppy’s early-game behavior. [Skip past the transcript] 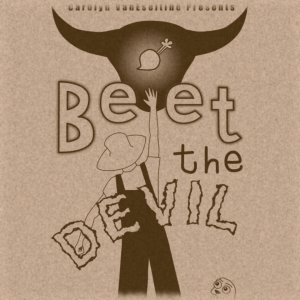 [Transcript starts]
The puppy bumbles out of the hay and pounces on your boot, wagging its whole rump enthusiastically.

>pet puppy
The puppy leans happily into your hand.

The puppy sniffs the great big pile of hay.

>pet puppy
The puppy makes a happy wuffling noise when you pet it.

The puppy lowers its head to sniff intently at the ground. Giving a sudden, high-pitched bark, it dashes off to the south.

Garden
It’s not dawn yet, but there’s a soft grey glow in the easterly sky framing the widow’s house, just enough light to stumble around without too much trouble. Great big ruts in the earth ripped out most of the potatoes, the peppers and tomatoes have been scorched to a shrivel, and the leaves are fried straight off the carrots and onions, not to mention the celeries. The mushrooms look sauteed, the zucchini looks worse, the artichoke stinks, the brussels sprouts stink worse, and even the turnip bush’s not doing so well.

The barn’s off to the north way, and that’s where the bird dog usually stays. There’s a small door you can get in.

The small puppy is here.

Still rooted, a single beet sits in the center of its row. Alone of every vegetable in this garden, it looks untouched by demoniac wrath, but appearances are deceiving and you could be wrong.

The puppy sniffs around a bit in the dirt near the sad zucchini plant before starting to dig. After pitching around dirt for a bit, the puppy unearths an old rawhide bone.
The puppy sniffs your left boot.

>x puppy
It’s a chubby brown and white pup with spots like the bird dog and a real waggy tail.

>get puppy
You scoop up the puppy in both hands. It’s awfully wriggly!

You are now holding the small puppy, though it’s plain that the puppy wishes you weren’t.

>get bone
The puppy turns its head away and tries to dodge you, but you take the rawhide bone away from it anyway.

The puppy whines and wiggles. It’s quite an armful!

The puppy paws urgently at your nose. It has scratchy little feet.

The puppy struggles frantically to get down.

With a bark of triumph, the puppy leaps out of your arms and lands on the ground. It wags its tail wildly in delight!

A puppy created with purpose

Obviously, the puppy takes advantage of one of the graceful handling techniques from last time – specifically, #6 – Create a communication gulf between NPCs and the player. No one expects advanced logic or excellent conversational skills from a puppy. Yet compared to many parser NPCs, the puppy feels very alive.

For the puppy, I made a rule that checks the puppy’s current status every turn to figure out what it should be doing. (Appropriately, in Inform 7, this is accomplished with “every turn” rules.) To figure this out, the game runs through a prioritized list of conditions, like so:

The “puppy play activity” is also fairly detailed – it checks things like whether the puppy is holding something in its mouth and whether or not the puppy can pick up anything nearby. (My favorite bug from this game involved the puppy picking up a demon and running off with it.)

People react to other people’s actions. Having customized reactions to the player’s interactions will make NPCs seem more alive. Leaving the default messaging in place will cause NPCs to seem robotic.

By intercepting actions directed at the puppy, I can write messaging that causes the puppy to react to the player’s actions. (This is mostly done with “instead” and “after” rules in Inform 7). The puppy has special reactions to:

Fortunately, puppies are pretty content to do their own thing, so the puppy doesn’t have to react to many of the player’s actions in order to seem realistic.

Humans are significantly more opinionated. (A puppy would not complain about someone walking across a pristine white carpet without taking off their muddy shoes, but the homeowner can at least be expected to arch an eyebrow.) The same kinds of rules (instead/after) can be used in this context, too, as long as they are preceded by a check to make sure that the NPC is present.

For even more realism, if you have two NPCs present, cause them to react to each other as well as the player. The easiest way to do this in Inform 7 is to add additional clauses into the “every turn” rule controlling the initiating NPC. For example:

This gives the illusion of a reaction from the music teacher, but from a coding perspective, the response is just built into the six-year-old’s original action.

People strive to achieve goals. NPCs with goals will seem more alive than NPCs who passively wait to respond to the player.

This is related to, but not the same as, being active. It’s possible for an NPC to take action without those actions being goal-oriented. For example, an NPC could walk up and down a set of office hallways (active), but unless the player can see a reason why the NPC is walking up and down the hallways (searching for a lost keycard? delivering the mail? getting some exercise?) then the NPC isn’t goal-oriented.

Programmatically speaking, the puppy is relatively complicated on this front. The puppy has a few different potential goals, all implemented by the if-then structure (get down if it’s being carried; wander around if it’s searching for something; chew on the rawhide if it has access to the rawhide).

But giving your NPCs goals doesn’t have to be a complicated process, and it’s often more a factor of writing than coding. If a given NPC wants something, and the NPC’s actions and reactions are aligned toward that goal, the NPC will seem more alive for it – even if the goal is as simple as “make this annoying person go away” or “pat the bunny” or “finish my burrito”.

People don’t give the same responses to the same stimuli every time, or take the same actions in the same way. NPCs will seem more alive if their messaging contains random elements.

Almost all of the puppy’s messages are randomized to give it a more “living” quality. For example, here’s one of the messages from a puppy that is currently being held.

if a random chance of 1 in 2 succeeds:
say “The puppy paws urgently at your [one of]shoulder[or]arm[or]hand[or]face[or]nose[or]chin[at random].  It has scratchy little feet.”;
otherwise:
say “The puppy licks all over your [one of]nose[or]face[or]neck[or]ear[or]chin[at random], finishing up with a curious nibble.  Ugh, puppy slobber!  Argh, sharp little puppy teeth!”;

There are 2 core variations leading to 11 different messages. I’m also taking advantage of a feature of Inform 7, which is that a textual [at random] will not produce the same message twice in a row.

If someone picks up the puppy and waits for it to struggle free three times in a row, they might get the same response on the first try and third try – but that’s still a huge improvement over seeing the same message all three times.

Why make this effort? Because brains respond to novelty. If we read the same sentence twice, we won’t give it the same attention the second time around – unless it’s been changed up a bit. Taking the time to produce variations will increase player attention, which will in turn increase the seeming reality of our NPCs.

I love writing NPCs – and writing this puppy, in particular, was a blast. But there’s a reason why I’m enthusiastic about ways to evade full implementation of human beings. The puppy is not a fully implemented NPC, and its code is… big.

The puppy is a major component of Beet the Devil, and it deserves all the code space it received. But it’s important to keep your priorities in mind and ensure that your time spent on NPCs will properly serve your game.

When I was first starting out in Inform 6, I spent a ridiculous amount of time working out conversations with a random passenger on the bus while I was building my first game. The passenger wasn’t important, and I don’t think the conversations weren’t particularly interesting. But I didn’t want my NPCs to be robotic, and an empty bus during rush hour seemed unrealistic, and I thought people had to be able to hold conversations.

If I were doing it again, I would still put people on the bus – but I’d deemphasize their presence, and if the player tried to talk with them, I’d establish that they didn’t want to talk to the player. Something like this:

>x passengers
The passengers sit in ones and twos, reading their books or staring out the dingy windows.

>ask passenger about bus
You try to ask a question of a woman in a brown leather coat, but she shakes her head and shouts back, “I can’t hear you over the bus!”

>ask passenger about bus
You try to ask a question of a man with wispy grey hair, but he only tightens his lips and turns the next page in his book.

With a few additional atmospheric messages – people getting on and off the bus, for example – and a reasonable set of customized responses to commands like touch, attack, and hug, these bus passengers will cover all four of the key points for realistic NPCs:

What’s more, heavy reliance on technique #4 from the prior post – Design NPCs who don’t want to interact with the protagonist – has saved me from spending unnecessary amounts of time on these NPCs, so now I can go on and write the rest of my game.

I hope this helps. If you have more questions about designing parser NPCs, let me know!