Where IF Met LARP: Remembering Versu

In February of 2013, the interactive fiction community was buzzing over a new project called Versu. Narrative innovator Emily Short and AI researcher Richard Evans had teamed up to create a new interactive storytelling platform with the backing of Linden Lab (the makers of Second Life).

Where typical parser-based IF focused on manipulating objects in a simulated environment, Versu focused on emotional interactions between simulated entities. Play transcripts looked more like screenplays than anything else.

One of the most interesting characteristics of Versu was that it automatically supported multiple potential protagonists. After the player selected a character, Versu AI would run all the other characters, making decisions about each character’s actions via AI logic in much the same way that the player decided upon the protagonist’s actions. 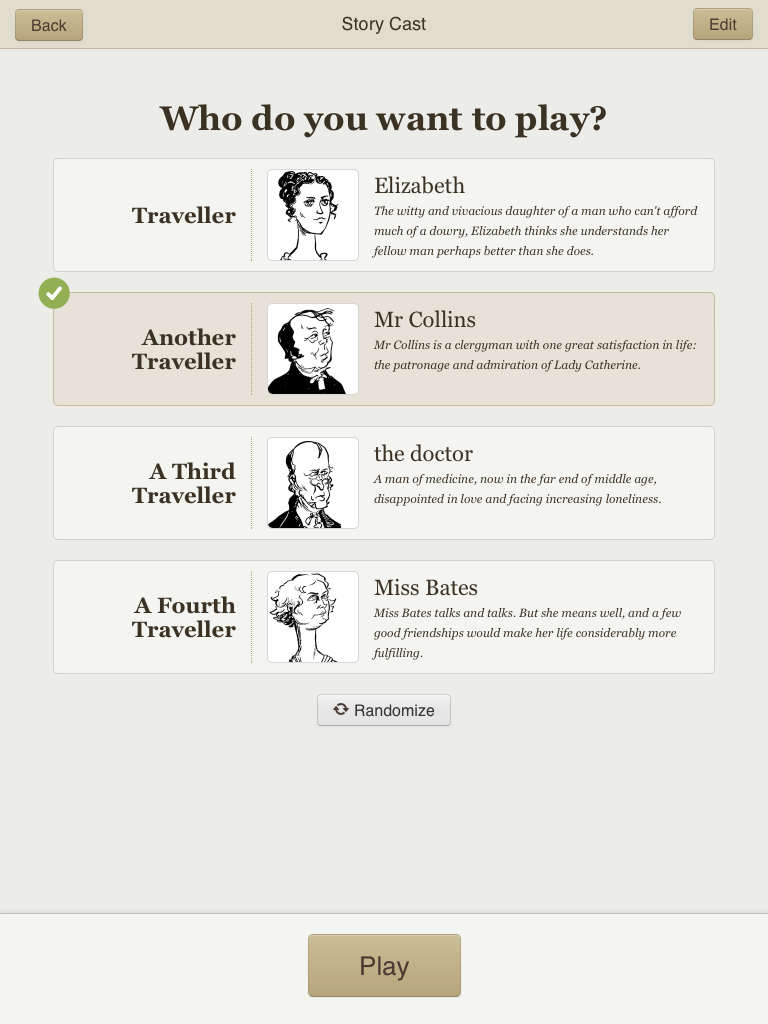 In some ways, Versu suffered from the same problem that Seltani suffers now – it was clearly very cool, a huge leap forward in technology and potential, but… what did you do with it?

I was in the Versu beta, and I had a plan.

LARP stands for Live Action Roleplaying Game. The term may conjure up images of foam-padded swords, masked monsters in the woods, and people flinging beanbags while yelling “Lightning bolt, lightning bolt!” – but it can also refer to theater-style LARP, which bears a much closer relationship to improv theater.

A convention-length theater-style LARP usually takes place in a single large conference room, often with hallway space or a second room available for breakout space. There may be props involved, either actual replicas of in-game items or index cards labelled with explanations. In this space, two to four GMs run a multiplayer storytelling event that lasts between two and six hours and involves between six and thirty players.

The process of writing a theater-style LARP is rather like building an elaborate narrative pinball machine, if pinball machines normally launched a dozen balls at a time.

When the game begins, the GM loses control. Goals and connections draw characters together or bounce them apart like physics acting on the balls in the pinball machine. If Ms. Bagpipe’s bluesheet says “You want to quietly discuss the rumors of a hostile Vulpinion takeover with Ms. Parsley”, then the GM can expect Ms. Bagpipe to seek out Ms. Parsley. If Mr. Pincushion’s bluesheet says “You have heard that Ms. Bagpipe and Ms. Parsley may be colluding against the Dauphin”, then the GM can expect Mr. Pincushion to keep an eye on Ms. Bagpipe and Ms. Parsley and to get worried when they start chatting in the corner.

…but maybe not. Maybe Ms. Parsley gets too caught up in her intrigues with Mme. Millipede to respond to Ms. Bagpipe’s overtures. Maybe Ms. Bagpipe decides Mr. Pincushion seems loyal enough to loop him into her suspicion about the Vulpinions. Or maybe Mr. Pincushion drinks the poisoned cocktail intended for Ms. Millipede and spends the next half hour under intensive medical care with Mr. Ellipsis, entirely missing his chance to observe any whispering in the corner.

In short, there are no guarantees. The player is the final determiner of what the character sheet means and how the character would respond. The GM doesn’t get to run in and say “Wait, wait, that’s not what I meant!”

What’s more, every character portrayed by a player is a protagonist. For the LARP to be successful, the story has to be equally interesting and satisfying for Ms. Bagpipe, Ms. Parsley, Mr. Pincushion, Mme. Millipede, Mr. Ellipsis, and every other pinball bouncing around the table.

This should sound familiar. The skill set and narrative design principles used to build a LARP – multiple protagonists, focusing on characters over things, individual goals, constantly considering emotional dynamics and information flow – are perfect for building a short story in Versu.

The fate of Versu

My initial story for Versu was a short piece called Strings and Sharps. It played out an encounter between three brilliant musicians and three of their biggest fans – who happen to be vampires. (It was definitely influenced by my experiences running Vampire: the Masquerade back in college.) Each of the six characters had distinct goals, inclinations, and information that influenced their interactions with the other five, creating a wide variety of possible outcomes from this relatively simple premise.

I sketched out Strings and Sharps at a narrative level, but ran full-force into problems with the Windows build of Versu. Unfortunately, those problems were never resolved.

On February 19, 2014, Linden Labs announced the end of Versu development. Emily Short made an effort to acquire the codebase and IP for Versu and the games created in beta, but Linden Labs refused her. There’s an excellent Gamasutra article that talks about Emily Short’s experiences and the end of the Versu road.

If Strings and Sharps ever sees daylight (as ’twere), it will happen as a LARP. The conversion from digital to nondigital won’t be difficult, because I already know what this game looks like on a narrative level. I can explain to each of the six protagonists who they are, what they want, and what tools they have to reach their goals. I can set up the pinball machine and watch it play out.

But the truth is, I want Versu back. We need Versu, or something like it.

Computer games provide experiences that we can’t access in real life. In real life, I can’t parkour across space station bulkheads, slay dragons with fiery arrows, or identify books in foreign languages by magic. But as a digital game designer, I can give a simulated equivalent for each of those experiences to other people.

I suspect that most of the people reading this article haven’t ever played in theater-style LARPs. Maybe some of you will be intrigued enough to try it, after reading this. And maybe you have access to theater-style LARPs – maybe you’re in New England near Intercon, or on the West Coast near Wyrd Con, or in Scandinavia near Knudepunkt, or near another of the global opportunities to try this interactive storytelling form.

But there are some people who don’t have access and won’t have access. For whatever reason – distance, time, money, social uncertainty, or simply opportunity cost – this interactive storytelling form is just not available to some people.

I want Versu back because Versu was the best tool yet created for bringing a LARP-style, character-driven, interaction-based story into computer simulation. I want to give that experience to my players – the experience of interactively creating a story in partnership with other intelligent, emotional entities.

Linden Labs has made their stance pretty clear, so I don’t expect to see Versu return. But since the dawn of computer games, people have been looking for better ways to simulate emotional connections and interpersonal interaction. There’s an open opportunity for someone else to examine the problem and find a new, even better solution.

And when the next Versu happens, I’ll be here.