The Many Authors of IFComp 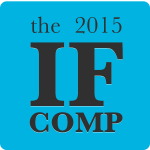 The 21st Annual Interactive Fiction Competition, aka IFComp, is underway from now until November 15. This year includes a record-breaking 55 IF games on at least 14 platforms. Anyone can judge the competition, as long as a) you’re not in the competition and b) you play and rate at least 5 games. It’s a lot of fun, and I encourage you to try it out if you never have before.

I’ve entered three times (and cancelled entries twice), so you’d think I’d have a solid opinion by now. Instead, I’m increasingly aware that we’re all submitting to the same competition, but we’re hoping to get very different things out of it.

IFComp is the highest profile competition that is exclusively dedicated to interactive fiction. As a result, it’s one of the most competitive space in interactive fiction. It’s also the best place to get feedback, because more people will play games submitted to IFComp (and write reviews for them) than anywhere else.

I haven’t submitted anything to IFComp without believing that my submission was good enough to win (depending on the competition that year). When I do, I expect feedback about what I did wrong as well as what I did right – and I value that, because clear feedback from real players is the best way to improve. I see IFComp as the venue for authors who want to compete, and having such a venue makes me happy.

I discovered modern IF in August 2004. I was working on my first parser game ever when I learned about IFComp. It was one day after the deadline and the organizer refused to accept my late entry, which meant I didn’t participate that year.

I had no expectation that my game would win IFComp – on the contrary, I was convinced that it wouldn’t. I wasn’t being competitive. I was being excited. I’d wanted to make text adventures since I was 5 years old, and suddenly I’d discovered not only a way to make it happen, but a whole world of people already doing it.

Back then, it wasn’t about competing. It was about joining these amazing people and showing them that I belonged in their space, too.

Today, I expect detailed and potentially hostile critiques when I submit to IFComp. But if I’d received that kind of feedback on my first game, I would have been crushed. (Processing feedback is hard.)

Emily Short has been reviewing IFComp games since 2000. This year, she publicly changed her policy:

“[F]or some years I’ve tried to review every IF Comp game that ran on my system and either a) listed beta testers or b) was choice-based. This year I’m changing that policy, in response to feedback that it’s too discouraging for novice authors, and will only cover games here for which my review is a net positive.”

I was surprised by her decision, but I can see why she made it.

When I was running ParserComp, I tried to make it as novice-friendly as I could, but at least one author had a severely disheartening experience (expressed later in the Twiny Jam game The World Model Is Really Problematic.)

This was deeply dismaying to me. I care about novice authors feeling welcome in IF spaces (especially spaces I’m organizing!)

But at the same time, the feedback wasn’t wrong.

I wanted ParserComp to be welcoming, but parser IF is a hard medium. New authors are likely to make errors because it’s really hard to not make errors in parser. That’s entirely understandable – but even seemingly small errors can render a parser game unplayable. And it’s often not obvious to the author when such errors have occurred, because the author knows how the game “should” be played. (Which is also why beta testing is important, but that’s not pertinent to the subject at hand.)

Looking back at my first parser game – I didn’t enter IFComp with it, but I did send it out to one IF person for feedback. He told me that he had to disassemble the code to figure out how to complete it. I slunk away in disgrace, and never showed it to anyone else.

Every experienced IF author has to start sometime. I started back then. Some people are starting now.

Where can new authors submit their games? In a rough gradient, looking only at annual events:

Of these, IFComp is the best known by far. Any of the other competitions listed would be a more welcoming debut venue, but new authors are less likely to know about them.

What about releasing outside an event or a competition? New authors can do that, just like anyone else can. And many people are unperturbed by this – see the Twine community, for example, where games are constantly published outside the context of an event.

But within the parser community, the IFDB numbers demonstrate that (on the whole) competition games receive far more attention than non-competition games. And a competition deadline makes a good target for tracking development progress. And IFComp comes with prizes, too.

So, refocusing on IFComp…

As our highest profile event, IFComp should be for everyone. Because IFComp is the best place for some kinds of IF to be seen, and people’s motivations for wanting their work to be seen vary wildly. Some people are competitive, and others are excited, and some have important things they want to express, and others just want the thrill of accomplishment from entering, and still others want to show off an experiment in a venue where they know it will receive attention.

IFComp includes all of these people.

And all of their reasons are okay.

I may be competitive – but I don’t want to chase anyone away. I hope everyone who enters IFComp this year will stay and make more games and improve and continue to celebrate interactive fiction. And if new authors are cropping up in IFComp – which they always have, and hopefully always will – then it’s worthwhile to hear their feedback and consider their suggestions about how we can make competitions more welcoming.

We lose nothing by doing so. We have a lot to gain.

Thank you to everyone supporting Sibyl Moon through Patreon!
If this post gave you food for thought, please consider becoming a patron.