Know When To Fold

An industry of gamblers

Creative work is a gamble.

Each time you sit down at your computer – or your notebook, or your easel, or whatever the tools of your specific pursuit may be – then you’re betting you can capture something from your mind and convey it to your audience’s. It might be an emotion, or a concept, or a story, or simply an image that existed in your mind that hasn’t existed in anyone else’s yet.

Game devs are usually capturing an experience, and it’s usually supposed to be fun. It may be many other things as well (consider Papers, Please, or This War of Mine, or With Those We Love Alive, none of which are primarily fun) but most frequently, game devs are in the business of capturing and conveying fun.

Like any other creative endeavor, game development is unreliable. Sometimes we capture what we want in our games, and then we celebrate our success. Sometimes we don’t, and we lose weeks or months of progress trying to figure out what went wrong. Often, key insights manifest right after we need them rather than before. (In one of the most painful anecdotes I’ve heard about writing, N.K. Jemisin recounted how she threw out 80k of The Kingdom of Gods and started anew because she’d written it from the wrong character’s perspective.)

This is why we miss deadlines.

“I love deadlines. I love the whooshing noise they make as they go by.”

– Douglas Adams, The Salmon of Doubt

That isn’t to say that we have to miss deadlines. Production (in game development) is the science of manipulating the odds for creative success within a deadline and budget. This can be accomplished by scoping appropriately to the deadline, tracking progress, keeping an eye out for upcoming risks, and being prepared to sacrifice features and reduce scope as needed.

But what if you’re not willing to sacrifice features?

Then you ask for an extension. Or you miss your deadline.

All of this is a roundabout way to let you know that I didn’t submit my ShuffleComp game. I listened to my song options, settled on two for inspiration (“All Things at Once”, by Tired Pony, and “Magic and Loss”, by Lou Reed) and then settled on an initial design that looked feasible within the time available.

But the more I worked on it, the more I saw that I wanted to make changes from the original design. I tried out the Inklewriter platform initially and then shifted to Twine because I wanted CSS. I added art and macros that weren’t in the original plan. I made significant changes to my prose style as I learned the voice of my protagonist.

Each of these changes brought me closer to the heart of what the game could be – something wild and dark and beautiful. But the schedule slipped with every change.

I could have cut back and created something more like my original design. I chose not to. But competition deadlines don’t move (at least, not for the sake of one competitor), which means I chose to miss the deadline.

There’s a certain bittersweetness to the decision, because not cutting scope means I’m not going to finish this game right now. Instead, I’m going to take all my design notes, file them into my archive, and lay this game on the stack with all the others I’ve set aside. Because there are only so many hours in the day, and because I have to prioritize where my working hours go.

Most of these games don’t see daylight. But over time, the concepts get repurposed, and the ideas get rebuilt, and progress continues overall even when it stops locally.

Here’s a glimpse of the game I didn’t finish. 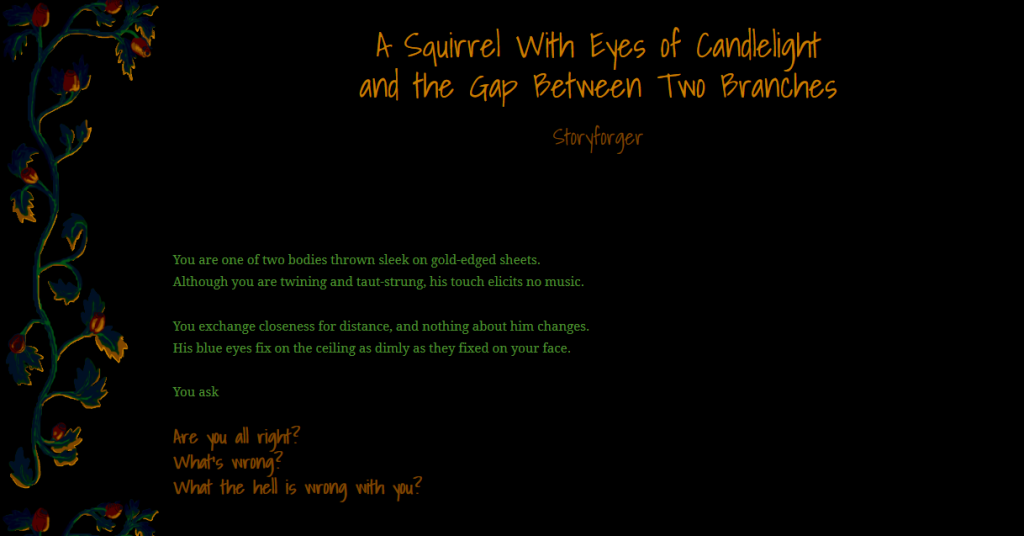 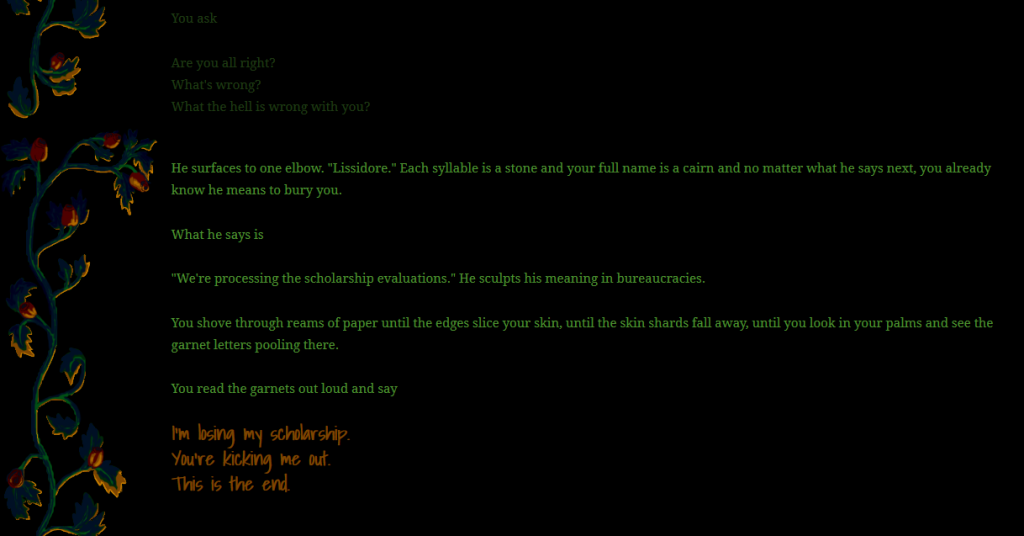