As an indie developer and interactive fiction author, I’ve worked in Unity, Unreal, GameMaker, Construct 2, and Inform 7, among other systems.

I’ve done more with Inform 7 than anything else. I’ve written quite a few games and a quick-start tutorial, and I’m currently running a competition called ParserComp, which exists to promote parser games (such as those written in, say, Inform 7).

But when people come up to me and say, “I want to make a game, but I’ve never made a game before,” I recommend Twine.

As a game development platform, Twine excels in three ways.

1. The intuitive interface makes it easy to play games.

As game developers and gamers, we build up conventions about how to play games. Consider the simple task of navigating a gameworld with a protagonist.

These are not intuitive! They are not wildly unintuitive – but they are dramatically different from one another, and attempting to use the wrong schema for a given game type is entirely ineffective.

The list above examines only one facet of games, for a narrow set of games – but what is the convention for

Most of these have no innate convention. They seem intuitive to experienced players of each game in question, but only because they have been taught how to play. One of the greatest challenges in game design is teaching players how to play.

2. The portability of the browser format makes it easy to distribute games.

Distribution and access are the first hurdle in acquiring players.

If players literally can’t play your game – because of OS conflict, because of download size, because of system requirements – then you lose those players automatically.

Then, looking at the subset of people who can play your game, you lose people based on how many hoops they have to jump through and their hoop-jumping tolerance.

Downloading a game is a hoop. Downloading an interpreter is a hoop. Installing a special plug-in is a hoop. Fiddling with DLLs is a hoop. Deactivating virus warnings is a very, very worrying hoop. Each time you ask people to do one of these things, you lose the players who say “no”.

Twine games require no downloads and no plug-ins. They are playable in all modern browsers, which covers not only most computers, but many mobile devices and probably some consoles. Making a Twine game available for players is as easy as taking the generated HTML file and putting it on a website – and free Twine hosting at philome.la removes even the need for the a website. 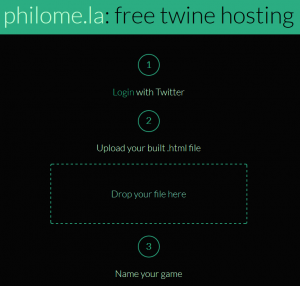 3. The streamlined visual interface makes it easy to create games.

Game design, writing, and coding are three different skills. The indie game dev scene, and especially the interactive fiction scene, conflates them to a certain degree – after all, when you’re the only person on your project, then you have to be responsible for all three.

But knowing how to code is an artificial barrier to game design. It’s like having to pass a trigonometry test before painting a landscape. Yes, trigonometry can be used to describe the shapes of hills and trees – but the skill sets are entirely different.

Before the advent of visual scripting engines, an aspiring indie digital game designer had two choices:

That isn’t the case any more.

Twine isn’t the only visual game engine. Construct 2, GameMaker, Gamesalad, Blueprint for Unreal, and Playmaker for Unity all provide visual scripting systems for game creation. These are all valuable, powerful tools, and for a graphics-focused game, any one of them would be a more logical choice than Twine.

Thanks to Twine, anyone can make games – and that’s a good thing.

(Apart from this, Twine is a great gateway to coding. But that’s beside the point.)

Twine allows more people to make more games that will be played by a broader audience.

I am proud to champion Twine. It says something about who I am and what I stand for.

You read this article, so you presumably have some interest in game development and easy ways to make games. If you’ve never made a game before – why not give it a shot?

You can start today. 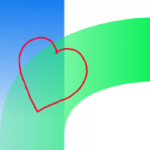