Like Five Gods Exiled, Always Dog and Not-Your-Person is a backburnered WIP that I’m bringing out for the Bring Out Your Dead semi-jam.

Always Dog and Not-Your-Person was an attempt to capture the inner spirit of being a dog. It is a game with 7 commands that all mean “vomit” (not to mention a variety of other biological necessities), so I am confident that I accomplished that goal.

Skip to the chase: Always Dog and Not-Your-Person 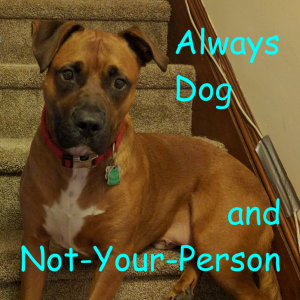 I started working on this game in January 2016 as a submission to the Ryan Veeder Exposition for Good Interactive Fiction. But time got short, and when I realized I couldn’t get it done, I felt so embarrassed about the state of its completion that I didn’t want to submit it (even though an email update assured us that unfinished games were okay.)

The premise: you are a dog, and for the first time ever, you have a dogsitter. Your goal is to have a fun, enjoyable time during the three days your person is gone (just like it is every day, even when your person is there – because after all, you’re a dog.)

It is possible for things that are not enjoyable to happen, such as getting yelled at or having to go to the vet. These things are (distressingly enough) occasionally linked to fun things. For example, if you eat a dead bird (fun!) while the dogsitter is watching, you will likely get yelled at (unenjoyable) and you might throw up (value-neutral) which could result in a trip to the vet (unenjoyable).

The lesson here: only eat dead birds when the dogsitter isn’t watching.

Other stats in the game include health, hydration, bladder, satiation, and bowels. They all work about like you would expect, but if you’re super curious, I’ve posted the source code.

This game contains 12 rooms and 50+ dog-specific verbs, all implemented to one degree or another. Of particular note, the map is rebuilt to represent dog awareness (no compass rose here!) and EXAMINE is, of course, a synonym for SMELL.

You can bark to summon Not-Your-Person from room to room, and Not-Your-Person will occasionally comment on your behavior. In the original plan, you would receive a translated, timestamped list of Not-Your-Person’s commentary at the end of the game. The debug command COMMENTARY will give you a sneak peek at those results while the game is running.

But you can SQUEAK a fuzzy toy, should you find one. Because that is the true meaning of Being A Dog.