Last night, I was the speaker at Women in Games Boston. The organizers didn’t ask for a specific topic – they just wanted me to come and give a talk of interest to the group.

What could I talk about? I made a list of my interests and expertise. It was a long list, covering topics as widespread as “playtesting and usability”, “console/web integration”, “agile development with scrum”, and “the value of game jams”. But I settled on a highly personal topic instead.

To wit: Harmonix was my dream job. Why did I voluntarily leave?

My talk evolved from a desire to explain my decision. The resulting presentation focused on three key recommendations for how to be a desirable employee, integrated with my personal philosophy on career tracking and happiness, some commentary on imposter syndrome, and a few thoughts on the ethics of game development.

I’ll have the audio up in a day or two, but here’s the most important stuff that I wanted to say. 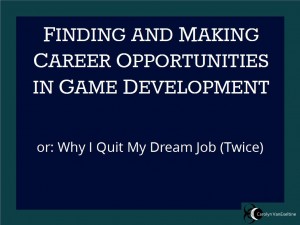 Finding and Making Career Opportunities in Game Development, or: Why I Quit My Dream Job
(the boiled down blog version)

Pursuing a career in game development is hard. It is hard for many reasons, and it is especially hard for women, given the predominance of men in tech and in gaming specifically.

It will become easier if you can recognize and celebrate your own successes. Impostor syndrome (“a psychological phenomenon in which people are unable to internalize their accomplishments” – Wikipedia) is very real, and the specific stresses of this industry make women in game dev particularly vulnerable.

The Three Most Important Things

Every job I’ve ever held (both inside and outside game dev) and every promotion I’ve ever received has hinged on these three things. Cultivating these qualities will help you find whatever opportunities exist and then put you in the best position to take advantage of them. By being enthusiastic, adaptable, and self-starting, you can find positions, convince people that you’re the right candidate for those positions, and become qualified for new positions.

This is the kicker. The games industry is a hard one to be in, even aside from the recent attacks against visible women like Anita Sarkeesian and Zoë Quinn. Compared to general software development, it’s harder to get employed in this industry, and game devs work longer hours for less money while receiving less respect from the general public.

Those are serious drawbacks, and all that compensates for them is love of the job. Without that, you might be better off elsewhere, or doing game development as a hobby rather than a career.

And that’s okay! Game dev is awesome, but there’s no need to be blinkered against opportunities outside the industry. It’s really important not to be, actually, because:

Sometimes those priorities are best met by an industry employer. Sometimes they aren’t. It’s okay either way – just make sure you’ve given thought to all your options.

So why did I leave Harmonix?

At Harmonix, I spent time in the playtesting department and web QA before departmental reshuffling shifted me over to production. I was a good producer, mentored by two senior producers who believed in my potential, but my heart really lay in design.

I tried everything I could think of to make the jump between departments. While at work, I took advantage of opportunities to contribute design ideas, shadow design meetings, and apply for design positions. While at home, I worked on my design skills through study, writing interactive fiction, attending game dev events, and participating in game jams. I was enthusiastic, I was adaptable, and I was self-starting.

This went on for three years.

Finally, I had to admit that it just wasn’t going to happen. I was valued and respected as a producer, and I was a great candidate for an entry-level design position, but when design positions opened at Harmonix, they required a level of experience and seniority that I just didn’t have. Furthermore, what I was doing, wasn’t working. The opportunities available to me at Harmonix wouldn’t allow me to acquire that experience, because Harmonix’s needs weren’t compatible with my priorities.

That’s why I left.

And… it turned out well! I spent the summer improving my coding skills, and in the fall, I joined Giant Spacekat as a game designer on Revolution 60 (July 2014, iOS). Being part of a five-person team provided me with entirely different opportunities than being part of Harmonix, and I learned by leaps and bounds. I originally came on to run playtesting and fill some combat design needs, but my role evolved to include systems design, cinematic scripting, narrative design, writing, QA, and even a little sound design.

Take control of your career.

Know your strengths as well as your weaknesses.

and, if you’re considering a game development career,