The first time I participated in a game jam was the 2012 Global Game Jam, and I impressed Courtney Stanton. She asked me afterward:

“How were you planning to finish that in a weekend? If you had a month, maybe… but 48 hours?”

Once I got over being A Special Kind of Impressive, I learned an important lesson about scope.

In the context of game development, “scope” refers to the projected size and complexity of a game project. 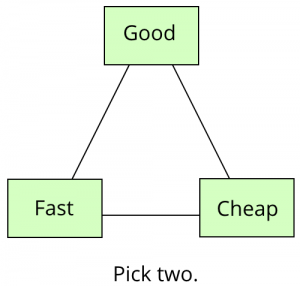 You’ve likely seen this diagram before, or one like it. (Probably not this one, since I whipped it up a few minutes ago as part of this post.) This diagram is applicable to any project, but it can function specifically as a description of scope in game dev.

Of course, it’s a simplification. Rather than a simple “pick two”, you balance among the three. A better version for game dev is this one: 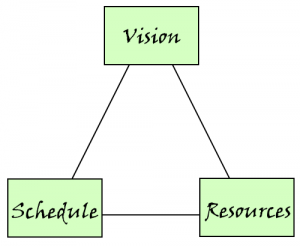 In a large game dev project, the producer is in charge of keeping an eye on the scope of the game. What’s the vision for the project (aka, what do we want to make?) What resources do we have? How fast can we create that vision with those resources? (Is it even possible?)

That’s why the producer is also responsible for reining in scope creep.

It creeps… It crawls…

Scope creep happens when features get added to a project after the initial time and budget estimates are done, especially when those features are added in an uncontrolled, undocumented way. It’s extremely easy for this to happen, especially in games, where it’s often hard to tell what will be fun, interesting, or necessary until the project is well underway.

That isn’t to say a producer’s job is to say no all the time. That code refactor might save months down the line, and that miniboss might be the best thing that goes into the game – but every feature change costs time and requires personnel. Instead, a producer’s job is to make sure the changes have a good reason and that the cost of those changes is understood and approved before anyone starts working on those changes.

Back to the game jam

In a game jam, you likely don’t have a formal producer, and you almost certainly won’t have someone dedicated to the role. In order to get this right, you’ve got to get it right from the beginning – despite having all the same uncertainties about tools, personnel, and “will this be fun?” that a giant studio and a giant game project have.

The good news is, you have all the pieces of the puzzle available.

You know your resources. Your budget is nothing (unless you’re way more enthusiastic about game jams than I am.) You have yourself, you have the rest of your team (maybe 2-3 people), and you have whatever skills and software your team already owns (or can beg or borrow for the time being.)

You know how much time you have. You have 48 hours, minus whatever time you need for eating, sleeping, showering (important), and not going mad.

Take a good look at that… 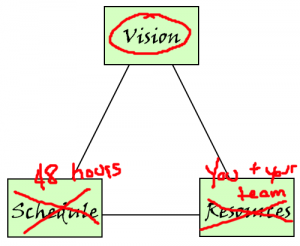 Two points of that triangle are fixed. You can only affect one of them.

To scope for a game jam, the question is:

What can you make in that period of time, with those resources, with that budget, that is a viable game?

Step 1: Start with a plan

At the top of the jam, plan your project out in advance, and look specifically at the minimum viable product.

Once you have those estimates, ask yourself: is this feasible in 48 hours, with this team, without any external resources?

If your plan is correctly scoped, and you take that plan and successfully execute it to the minimum, then you have created a game. Hooray! At that point, you can add whatever features you want without endangering the project as a whole.

You will be tempted to expand your feature list before you finish that minimum execution. Don’t succumb to this temptation. It might not look like you need the time – but it’s amazing what can go wrong along the way. I’ve been doing digital game jams for years, and there have been major bumps along the road in every single one, with reasons ranging from “None of the programmers are running the same OS” to “Can’t art, unrelated drama is destroying my brain” to “What do you mean, ‘version control’?”

Once you get the minimum execution done, then you can add features on top of your minimum without any risk of failing to complete a game. And that’s fantastic! Consider it a cookie for your hard work.

When I participated in iamagamer.ca, our team was really well-behaved about sticking to the plan. We got our minimum done by Saturday evening, and I got really excited because it looked like we were going to have time to implement a fourth enemy type. 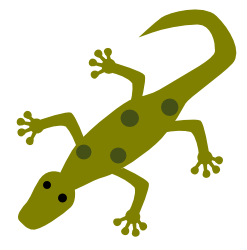 Rats, hounds, evil blobs, AND adorable lizards! It was going to be the best!

Our artist Caelyn did all the work… but there just wasn’t enough time for me and Ethan to get the lizards implemented mechanically. The lizards languished tragically in the folder where unimplemented lizards must go.

It happens. It’s a game jam. We released Trapper’s Trials and moved on. 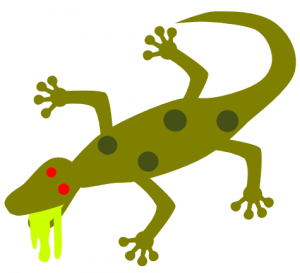 Most of us moved on. It’s hard to be an unimplemented lizard.

The most important thing about game jams

If your game jam project doesn’t work out, that’s okay! Game jams are 48 hour projects, and at the end of those 48 hours, you can wipe the slate clean. Game jams are educational and good for networking and good for skill-building, and they give you opportunities to try new and different things – but at the end of the day, they’re primarily for fun.

Which pretty much means: