Welcome to Adventure: Lesson 3 (Doors, Keys, and Text with Variations)

This is the third in a series of quick-start Inform 7 tutorials using examples from Colossal Cave Adventure. More information about this tutorial series can be found here: A Quick-Start Guide to Inform 7.

In Inform 7, a door is a thing that connects two rooms by way of a direction. The code for a basic door might look like this:

This will produce a basic door that you can walk through by way of a direction, or by entering the door. The player can open and close the door at will. The player will attempt to open a closed door automatically before walking through it, and the player will stop entirely if the door is locked. 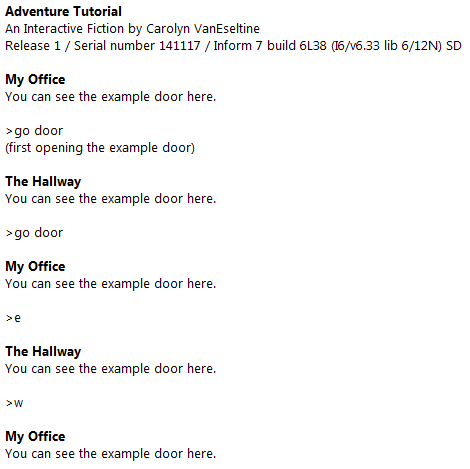 As with other things, you can learn about the properties of a door by using the SHOWME debug command. 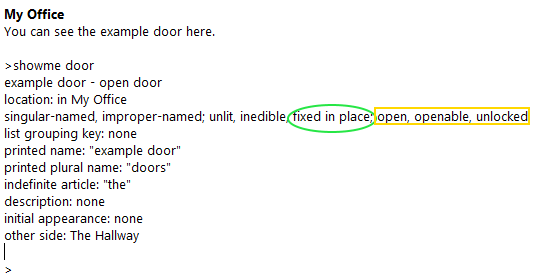 Doors are automatically fixed in place. Doors also have a few special properties of their own, including open/closed, openable/unopenable, and locked/unlocked.

A Door By Any Other Name

A door doesn’t have to be called a “door”, and many are not. The stairs between At Top of Small Pit and In Hall of Mists are a door that cannot be opened or closed. The source code:

Multiple Descriptions for One Door

The appearance of the stone steps changes depending on whether you are in At Top of Small Pit or in In Hall of Mists.

We can replicate this effect by giving the steps an initial appearance with two built-in states, like so:

By default, the Inform 7 term “location” means “location of the player”, which means the room the player is currently in. But it doesn’t have to be the player. Consider this source code: 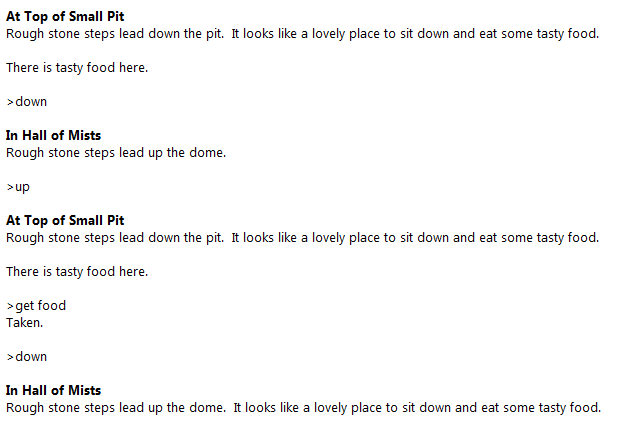 You can also affect the description of a door based on a property. Going back to the first example:

This kind of description change is not door-specific. It can be enacted on any piece of text, including room and object descriptions. For example, you could change the initial appearance of the bear based on whether or not the food is in the room:

Altering text on the fly is an incredibly powerful tool that deserves far more attention than it will receive in this quick-start tutorial series. It is covered comprehensively in chapter 5 of the Inform 7 manual.

Here is an updated version of the code to connect End of Road and Inside Building.

Doors that Lock and Unlock

At Slit in Streambed, there is a locked steel grate. The grate can only be unlocked with the keys. Here is one way to set this up:

Note the debug command PURLOIN, which will move an object from wherever it is in the game into your inventory. It is very useful for things like testing a key that you have not actually placed in a room (as is the case with the set of keys in the source code above.)

Containers that Lock and Unlock

Like doors, containers can be locked and lockable, and they can be unlocked with a matching key. This is useful in a wide variety of ways, although none of them are exemplified in Adventure.

To learn more about doors, keys, and text with variations, see the following parts of the Inform 7 manual: